Today (Sunday) was the Essex Megafinal. This was a major event with about 200 entries from and elsewhere. Players were competing to become the best boy (Supremo) and girl Suprema) in age groups from U7 to U18. In addition anyone scoring 4/6 or better qualified for the South of England Gigafinal in July.

17 players from CJCC took part (not the same group as yesterday – two events in one weekend was too much for most!). Without any responsibility for the tournament I spent the day in the sunshine chatting with the children and parents from across .


9 of our players scored 4/6 or better to qualify for the Gigafinal and congratulations to them. It was also the first tournament for some of the club so a good learning experience. 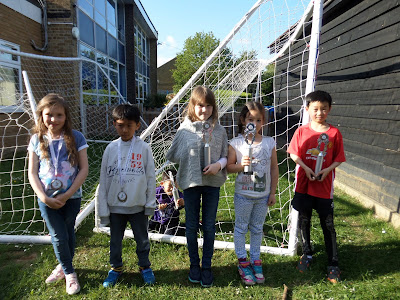 Above is a photo of a few of the winners. From left to right are Alice, Jixuan, Anna, Olga and Jerry with Harry hiding in the goal. Olga, Jerry and Harry all got 6/6 in their sections.

Harry has also won the English Chess Federation U7 Grand Prix (a compilation of tournament results over a whole year) so a double celebration for him this weekend.