CJCC finished tonight ahead of a week's break for half-term. We'll meet back on the 31st October with the older group (and Halloween snacks).

Tonight the younger half (plus a few older ones) had a Checkmate Competition. We had queen, rook and king against king and had a competition to see who could checkmate in the fewest moves. For the less experienced players it was a good chance to practice their technique and for the stronger ones an equally good chance to do a bit of teaching.

Congratulations to Olga, Eddie, James and Amelie for their prize-winning efforts and thank you to Leon for donating the swiftly consumed prizes from his refreshment table. Congratulations also to Olga for scoring 5/6 in a strong girl's event at the weekend.

The club will be closed on 5th December because I'll be at the London Chess Classic at Olympia with the KEGS U13 players so the whole club is invited to a Christmas Buffet on 12th December. 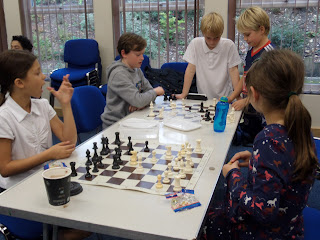 This is from last week with Phoebe and Francesca distracted by Alexander's match against Felix and Adam.