This was the first week back after the summer. It was great to see everyone again and welcome Hector, Adhvaith and Karan. Thank you to Ben and Stewart who met and took the KEGS Year 7's along as a group. They will do the same on the 25th September.

Scott (Year 13) and Leon (Year 10) were back to help out and were joined by James Bishop (Year 12) who will be with us this year as part of KEGS Community Service. James came along as a player in Year 7 so a nostalgic afternoon for him.

Russell was also back. He kindly brings the St. Anne's players along after running their school club and showed one of Olga's games on the demo board. Olga, Felix and James Z all qualified for and played in the Terafinal Challengers event last weekend which was a great achievement by them. 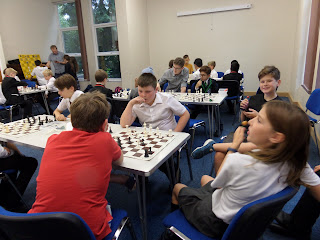 Theo concentrating against Tom closest to the camera (watched by Millie and Josh). 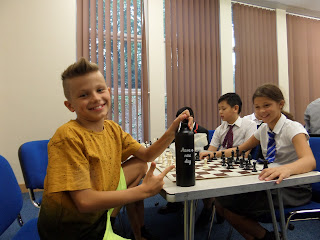 Hughie with a message for all. 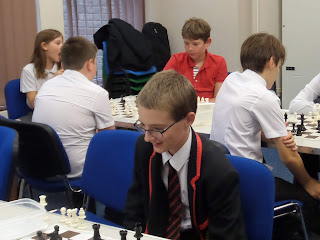 Ben enjoying his game with Scott. 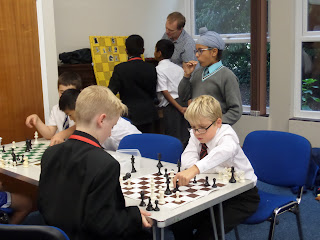 Russell is showing one of Olga's games on the demo board. Adam and Felix have transferred their Moulsham chess rivalry to KEGS.