Today in Chelmsford was the final EJCA (EJCA) Grand Prix event of the season. CJCC had 15 players taking part.

In terms of point scoring the girls led the way with Olga finishing a magnificent 2nd in the U18 Open and Anna leading the U11s at the half-way stage. Olga was also 2nd in the overall U11 standings.

But congratulations also to Tokumbo, Juan and John who were making their EJCA tournament debuts in the U9s. Juan and John shared the prize for Best Newcomer across all the different sections.

Congratulations to Hector as well for the way he conducted himself in defeat in the hall - the spirit he offered his opponents his congratulations after the game was an example for everyone. 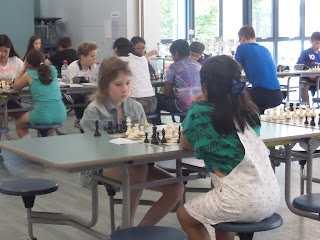 Anna (pensively facing the camera) had a tight battle with Mae on the top board in Round 4 of the U11s before eventally losing. 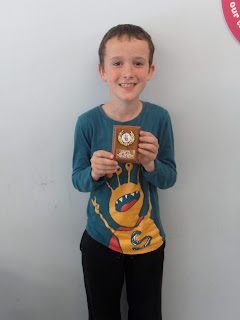 Juan with his Best Newcomer trophy - a chess souvenir to take back to Spain in the summer. 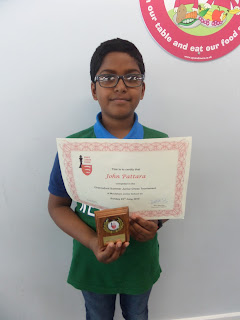 John with is Best Newcomer trophy and certificate. His sister Janet will make her debut soon.