This week we completed the last week of the Delancey UK Chess Challenge and below are the final scores and qualifiers for the Essex Megafinal. Overall 163 matches were played by 62 players. Congratulations to everyone who took part and thank you to Josh for taking charge of recording the results for the younger half. 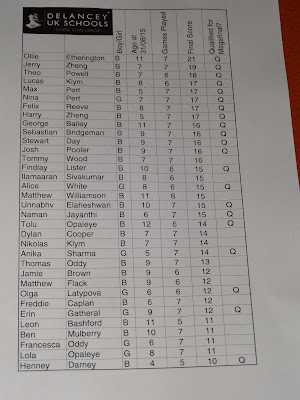 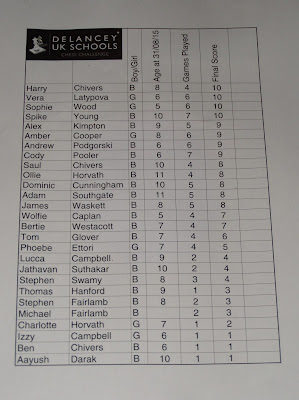 The qualifiers are generally the highest scoring boy and girl from each school year with an adjustment to favour those who scored their points against the older players. I’ll send an entry form and more details on the Essex Megafinal to the qualifiers.
This weekend there is an Essex Junior Chess Association training afternoon at Saffron Walden I’ll be coaching at and I know a few of the CJCC players will be there. It is also the Southend FIDE Open Chess Congress where Olga and will be competing against adults so the best of luck to both of them.
played for the Essex U11 team last weekend along with Jamie and Sebastian and the county have qualified for the National Finals. It has been great for our club to have so many players involved with the U9 and U11 teams in the last couple of months


The club will be open over Easter for all our players.
Best Wishes
Robin
Posted by Chelmsford Junior Chess Club at 13:39