Via the link below are the results of the inaugural junior tournament which was a great success. The tournament finished with a giant simultaneous match featuring GM Jon Speelman, IM Richard Pert and WGM Dagne Ciuksyte.


It was great to see Erin and Tom from our club in their very first tournament alongside our more regular tournament players and Anika build on her play at the Megafinal to win two games.


The next link takes you to the Megafinal crosstables with full details of all the different sections and the scores of the 18 CJCC players.


Finally a link to the EPSCA event in Camber Sands where the Moulsham school teams featured 6 CJCC players. Heycroft Primary from Leigh and R. A. Butler from Saffron Walden also represented and both were in contention until the final rounds for the overall U11 title. The photo shows Heycroft in the purple polo shirts and Moulsham in the maroon sweatshirts before the first round. The playing hall at Pontins was a colourful as this photo suggests. 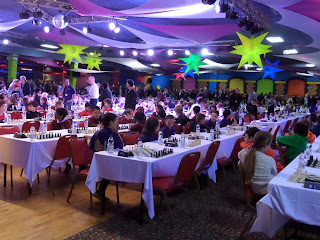 Congratulations to the Moulsham players. They had a great time, played extremely well and fought hard all weekend. They were a credit to their school and made the weekend great fun for me.