I’m delighted to tell you that Chelmsford Chess Club’s Elliot Cocks is the new British U16 Champion. His score of 5.5/7 put him half a point ahead of a tough field (he was seeded 7th).

Before playing at the British Elliot represented at the European Schools Championships in and in the Glorney Cup so has not been short of match practice. Tomorrow (Sunday) he starts in the U15 Championships and is midway through the Major Open.

Elliot was a key part of the A team who won the North Essex Chess League this season and has been coming along to the adult club since he started at KEGS. Back then I used to share chess ideas and interesting games with him. These days it is the other way round.

Elliot also has a unique place at CJCC despite being too old and too good to come along because he designed our poster. 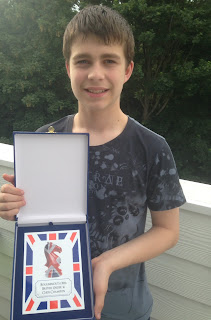