This week was our final regular week until September although the club will be open on Tuesday 16th August for mid-holiday chess. Everyone not on holiday is welcome to come along. Also in August (on the 20th) will be the next CJCC coaching workshop.

The adult club in Chelmsford will stay open all summer however and a number of the junior players come along. Details via www.necl.org.uk/chelmsford

Even Jake - who has just returned from Antigua - thought it was hot today so I was pleased to see so many players come down. Here are some photos from today including one of Cody with Olga and her trophy which he turned into a piece of chess art. 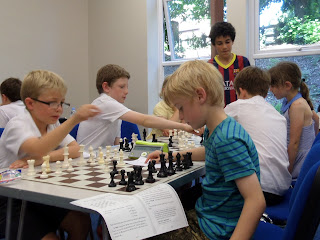 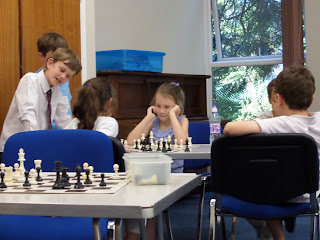 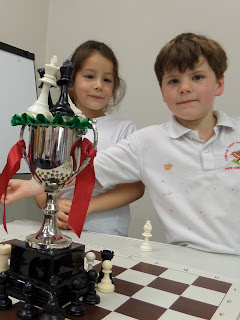 One important thing I did was announce that our Club Player of the Year was Josh Pooler. Josh has been along nearly every week and helps out with the younger players as well as sorting out the refreshments. Along the way, also helped by coming along to the adult club on a Thursday evening, he has become a fine player as well. He is the proud owner of a rather fine chess medal engraved with his name.

Good luck this weekend to our 5 players competing in the U8s and U9s British Chess Championships.