This weekend the London Chess Classic (www.londonchessclassic.com) finished at . The LCC is a festival of chess that lasts 9 days and includes an all-play-all between 10 of the world’s leading players (the strongest tournament ever to take place in the ). It is tied to the Chess In Schools charity and the festival does much to encourage junior chess. It is also the only chess tournament I ever go to that feels like a professional sporting event.


During the week 500 children each day take part in coaching and a tournament which is all co-ordinated by former player Jon Bryant. On Monday I went up with some students from KEGS who (led by fearless CJCC player Ollie Horvath) managed to collect the autographs of all 10 Classic players.


On Sunday I accompanied CJCC players Nina and Max Pert. They were joining CJCC parent (and British Rapidplay Champion) Richard Pert in the Super Rapidplay. This 10 round competition over two days featured 475 players including over 40 Grandmasters. Nina and Max both won two games and Richard was the highest non-GM finisher on 7.5/10.


There were quite a few juniors playing in the Rapidplay (partly because they enjoyed free entry). KEGS pupil and British U16 Champion Elliot Cocks – who also designed the CJCC poster – scored an excellent 6/10 including a first win over an International Master.


Nina and Max are pictured next to a picture of their new favourite chess player. Wesley So (an American Grandmaster in the world’s top ten) won the all-play-all and was kind enough to sign their programmes and have a chat with them after the tournament. It was great to see the top players take the time to sign things for the juniors and added greatly to their enjoyment of the event. 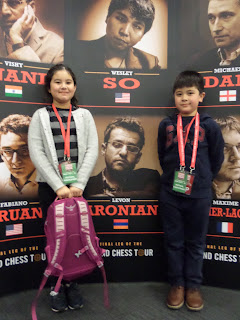 There is a lot of junior chess coming up in in the first part of 2017 which I’ll outline in a later post. CJCC will meet back on the 10th January.