Last weekend was the English Primary School Chess Association tournament at Camber Sands. Teams of 6 at U11 or U9 level had qualified for this semi-final with the top 3 in each section going on to the National Final.

CJCC and Essex interest was in the U11s where 40 teams took part. Many congratulations to Brentwood Prep (with CJCC's Jake) for winning the event and qualifying for the final. Former CJCC players Nina and Max were on the top two boards.

All the Moulsham team are current CJCC players and it was great to see them bounce back on day two to finish on 15/30. Photo below  - right to left - of Felix, Toby, Adam and Eddie in action. Ilamaaran and James were the other two players. 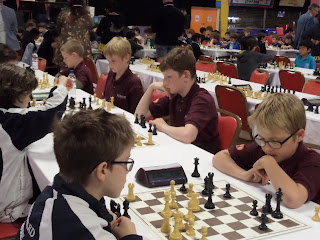 I was officially there with Elm Green who had former CJCC players Jerry and Harry on the top two boards. Jerry always looks this focused at the board but this is a rare sight of Harry sitting down (he generally plays standing). Congratulations to Elm Green for winning a Gold Award for finishing in the top third. 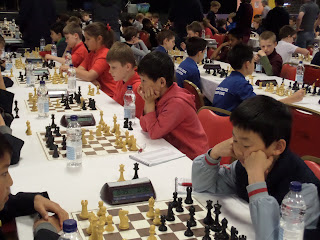 This weekend it is the Essex Junior Chess Association tournament at Colchester. No shortage of junior chess events to choose from.