Today was the EJCA Grand Prix tournament at Colchester. As ever quite a few CJCC players took part and well done to Jake for winning a trophy in the U11s. 6 CJCC players were in the U9s which is a great sign for the future.

Special congratulations to Josh. He lost his first ever game on time today and won his first ever tournament prize. Josh reminds me he is the player who has been coming on Tuesdays the longest (4+ years) so perhaps it is about time. 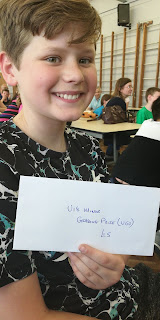