Last Sunday (18th) I was helping run a tournament on behalf of the Essex Junior Chess Association at Basildon. Quite a few of our players were involved and did very well.

Sid got a special trophy today (see photo below) because he concentrated and played very well to beat the highest-rated player in the U8s despite being the youngest player in the tournament himself. Vivaan also won a trophy today for his play at the club.

Next Sunday (25th) I'm involved with running a secondary school tournament at KEGS. Plenty of CCJC interest in the KEGS and Moulsham teams.

CJCC players Eddie and Theo have organised the Moulsham teams themselves because they wanted to play and their school didn't enter. They've even recruited our snack tsar Leon (Year 10) into a team for his first competitive chess since Year 6. 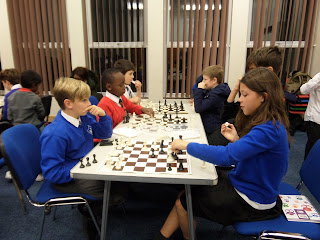 Nice to welcome Bertie and Phoebe back to the club. 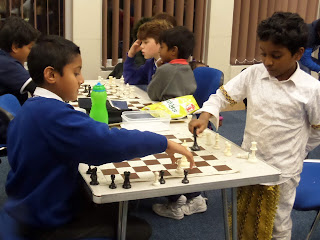 Dinil had a great battle with Prady before finally winning. 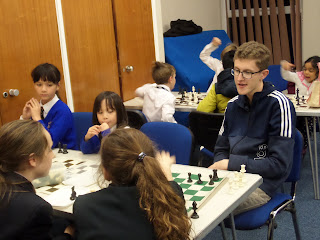 Scott plays the Alices watched by Aoife and Roisin. Milana looks excited behind. 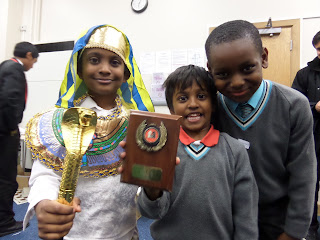 Sid with his trophy together with his brother Prady (it was Egyptian Day for Year 3 at St. Cedds!) and his classmate Tokunbo.