Through a generous festive eye this position resembles a Christmas tree. This is a checkmate puzzle for the juniors with a few near misses that I wish I’d composed a couple of weeks ago. I like it though so we might have Christmas again in January at the club. 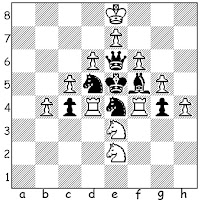 White is moving up the board as usual. Whether it is white or black to move they each have a single way to deliver checkmate in one move.


Now move the black king to “h1” and change the direction so white is travelling down the board. If it is black’s move how many ways can he deliver checkmate in one move?


Finally magically transform the black knights and bishop into black pawns. How many moves can white force checkmate in on the king on h1? 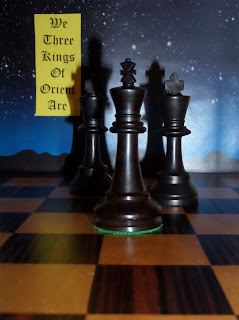 Posted by Chelmsford Junior Chess Club at 14:04 No comments:

It was our final meeting before Christmas last night. We had the most unhealthy buffet I’ve even seen as the players chose what to bring in. A mountain of crisps and biscuits without anything close to fruit or salad in sight. Most of it got consumed which was a fine effort. 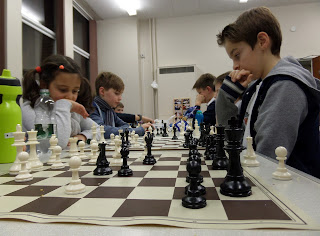 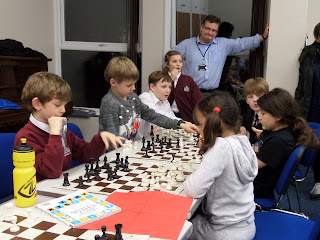 We will restart after Christmas on Tuesday 5th January with a bit of coaching for the players just starting off. Between then and Easter we’ll play a seven round club tournament as part of the Delancey UK Chess Challenge with plenty of prizes and a chance to qualify for the Essex Megafinal.

Today I went to the funeral of John Priestley. He was a very strong player and the first person I played at the adult Chelmsford Chess Club. I remember him telling me not to worry because although he was Chairman he wasn’t the best player at the club. This did not turn out to be the most accurate summary of his strength he could have given an 11 year old.


I remember him being tall and old but he was younger than I am now. I guess this means the children at the club also see me as old. A sobering thought.

Posted by Chelmsford Junior Chess Club at 12:45 No comments:

This week at the club we were all either learning or teaching a checkmate. Thank you to the stronger half of the club for sharing their time and skills. It was a good job they didn’t know we would run out of biscuits or they might not have been so happy. Next week we’ll have a Christmas buffet so no chance of running out of food. 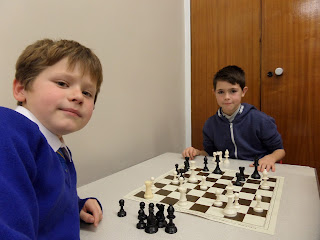 Josh and Harry pause to pose. 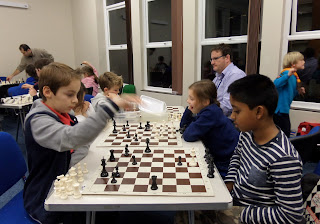 Stewart about to put Ilamaaran out of his misery. 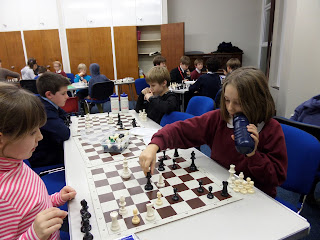 Francesca and Charlotte in the foreground. It is nice to have so many girls at the club. 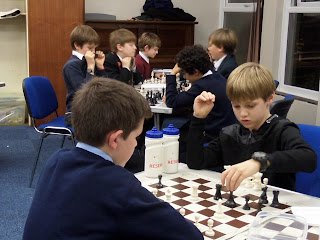 
Wednesday I went up to the London Chess Classic at with 16 players from . They had a great time and were a good advert for their school with the way they conducted themselves. The proof of the value of the day was everybody playing chess or solving problems on the tube and train journey home rather than the 5 medals won by some very fine chess.


The school sessions for 500 pupils a day are organised by Chess in Schools and Communities (CSC) who are doing excellent work introducing chess into the curriculum of schools across the country.


Wednesday evening was the Chelmsford adult chess club’s Christmas Party which is much like a regular chess night with the addition of a fine buffet (thank you Mario and Monica), free drink, music, some rather nice balloons that lit up in the dark, much socialising and a tournament.


Quite a few older juniors came along to discover an adult chess club (or at least ’s) is a pretty fun place to be. I look after the junior players at the adult club and am keen to close the gap between the adult and junior chess world.