CJCC will meet back on Tuesday 4th June with the older players. Our dates through to the summer are below. Please note there is no meeting on 2nd July.


Congratulations to Anna and Alice S last weekend for both becoming Supremas at the Essex Megafinal. Well done also to everyone who qualified for the Gigafinal.

On Sunday 23rd June the EJCA are running a tournament in Chelmsford. Details at www.ejca.co.uk. Hopefully we'll have the usual strong CJCC attendance and scoop a trophy or two.

British Chess (www.britishchess.co.uk) will run a two-day Holiday Camp in Writtle on 19th/20th August. Details to follow. In addition I hope to run a couple of chess workshops at the CJCC venue in the holidays.

It was the older half of the club today and we had something that resembled the Caucus Race in Alice in Wonderland.

Part of the club split into two teams today and everyone played a single move on a board before moving to the next in a haphazard crocodile. Femi eventually delivered checkmate to finish the contest and return things to sanity. 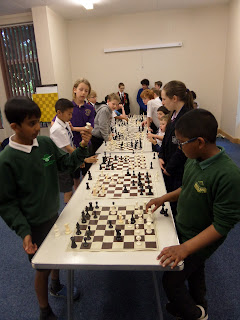 Luv and John at the head of the Caucus Crocodiles mid-race. 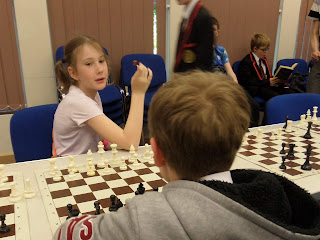 Anna and Ed - our Caucus Race captains - relaxing after the contest. Felix in the background has retired into the world of Percy Jackson. 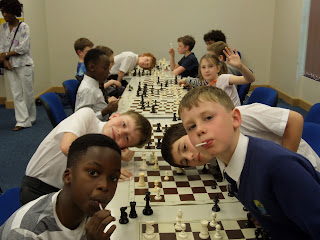 Femi, Alex, Laurence, Hector, Anna and Josh all quicker to spot a camera than a tactic on the board. Alex and I teamed up to play Femi. 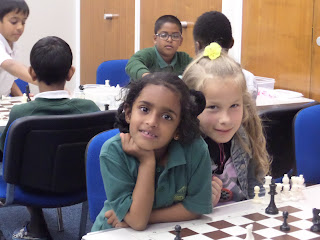 Milana and Janet teamed up against Alice. Janet's brother John in the background. Kush (standing) playing Luv in the top corner.

Well done to everyone who took part yesterday in the 4th U12 Brentwood Open. We ended up with 63 players in total including 14 from CJCC. Thank you to everyone who helped make the tournament such a success.

Congratulations to Nina for winning the overall event and becoming Brentwood Prep Champion at the same time. They'll be a report, crosstable and photos at www.britishchess.co.uk in due course. 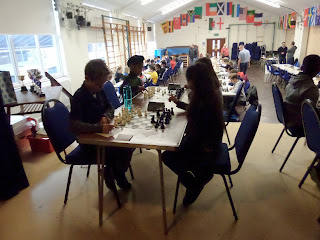 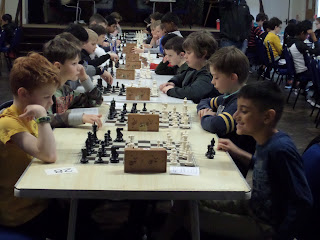 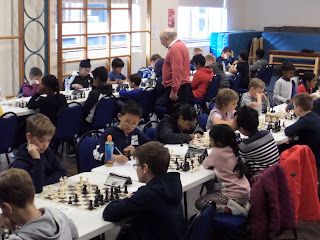 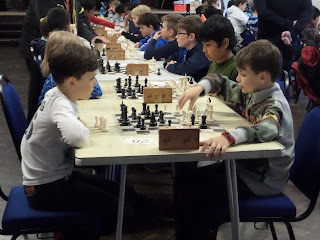 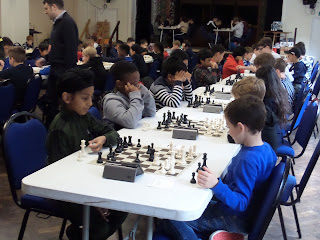 Along with our regular club on Tuesday I'll be coaching this week at Brentwood Senior School, KEGS, St. Cedd's, Elm Green and Moulsham Juniors. The players will range from Reception at St Cedd's to Year 12 at Brentwood. Great to have so much interest in the game.

Posted by Chelmsford Junior Chess Club at 07:36 No comments:

It was the younger half of the club this week. A couple of photos below (plus one from the previous week). 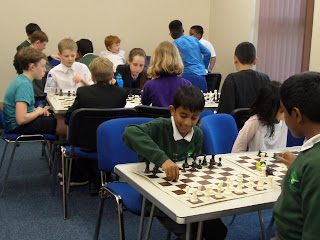 A busy week with the older players last week. 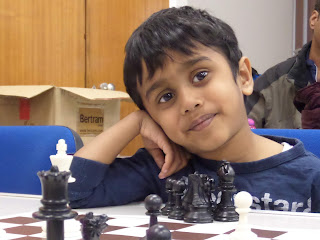 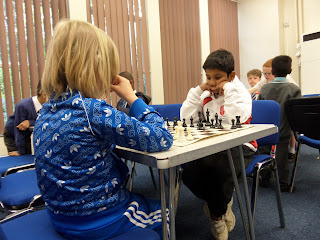 Prady received his trophy today for finishing as the highest-placed player in the UK Chess Challenge from the younger half (and second overall). John was Player of the Week.

Congratulations to Jixuan who was our best scorer at the EJCA Colchester tournament last weekend. Good luck to everyone playing at Brentwood this weekend (quite a few in their first tournament).

Finally welcome home to our former players Nina and Max who have just returned from the World Junior Championships in Turkey. Max scored 5/9 in the U9s. Nina 6/9 in the U11 girls to finish 7th.