Well done to all our players who qualified for and played in one of four National Gigafinals in the last few weeks. Many congratulations to CJCC players Anna, Jixuan and Dinil who all qualified for the Terafinal Challengers. Former CJCC player Jake also qualified.

Three of our former players (Olga, Nina and Max) did even better and qualified for the main Terafinal (the National Final) by winning their age groups at a Gigafinal.

Olga, Nina, Max and Jake are currently at the British Championships so the best of luck to them.

The British Championship and the new chess grades can all be found at ECF. 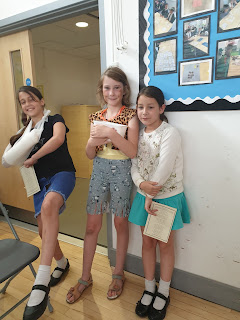 Congratulations to Anna (centre) and Olga (right) on their Gigafinal results. Olga's wounded sister Vera went along for moral support. In lieu of a chess photo this is from Anna's school production last week where she was Mowgli.


Posted by Chelmsford Junior Chess Club at 13:19 No comments:

The regular CJCC club finished today for the summer. We will meet back on Tuesday 10th September. It was sad to say goodbye to a few players who are leaving Chelmsford for a fresh adventure.

Good luck to our players competing in the Gigafinals this weekend. Hopefully they can qualify for the Terafinal Challengers.

I am running two coaching sessions at CJCC in August. These will run for two hours with a mix of coaching in small groups or 1-to-1 and guided playing. Numbers are strictly limited with entry by email in advance. The sessions run 2pm-4pm on Tuesday 6th August and 10am-12 noon on Saturday 24th August. The cost is £10 per session.

British Chess are running a two-day Holiday Camp on 19th and 20th August for tournament players. Details at www.britishchess.co.uk.

Just before CJCC returns the EJCA will run an invitational coaching day in Chelmsford on 8th September for stronger or promising Essex juniors.

Have a great summer if I don't see you before September.

The Essex Junior Chess Association (www.ejca.co.uk) is responsible for running the majority of junior chess activities in Essex.

They now have a new facebook page which will report on all junior chess within Essex and is being run by one of the older Essex juniors so please take the trouble to click onto it and follow or like the page.

Good luck Sarah - it is an excellent initiative.