No club next week (23rd) because it is half-term. Back on 30th October with the dates up to Christmas expected to run as follows.

The older players will be involved in an all-play-all tournament. The younger ones in a ladder tournament with upward progress down to learning, enthusiasm and a willingness to help others as well as wins.

We have quite a few new players just starting on their chess journey and it is important that everyone helps them on their way. This week we welcomed Aoife who joins a growing group of young girls at the club.

Over 20 current CJCC players took part in the EJCA Tournament at Moulsham Junior School at the weekend. All of them won at least 1 game and conducted themselves excellently but I'd like to mention 4 players who caught my eye.

Olga narrowly missed a trophy in the U12s. Maheep scored an impressive 4/6 in the U10s including beating 2 players graded over 70. Ben P chose to enter the top section and did very well to score 2.5/6. Nye showed great determination in his first tournament to score 2 wins in the U10s.

Posted by Chelmsford Junior Chess Club at 12:46 No comments:

KEGS in Chelmsford are hosting two secondary school chess tournaments for teams of 4 on Sunday 25th November on behalf of the English Chess Federation. Details of the event are on the ECF calendar (see link below) or ask me for details.

KEGS have over 20 graded players and are one of the strongest chess-playing schools in the country. At Eton College last month KEGS entered 2 teams in a competition with representatives from each school year (7 to 13) among the 14 players. Quite a few KEGS players come to CJCC and a couple of A-level students help me to run the club. It was the older half of the club this week. 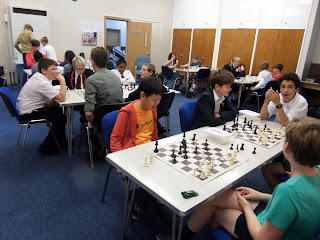 At the same competition Brentwood School finished in the top half despite fielding the youngest team out of the 40 schools and 50 teams competing. Brentwood School have every chance of challenging KEGS position as the top Essex chess-playing school in the next couple of years.

On 3rd March 2019 Brentwood School will be hosting a Train and Play chess day on behalf of British Chess (www.britishchess.co.uk). GM Matthew Sadler (grade 283) and WIM Natasha Regan will be joining IM Richard Pert and myself to deliver the coaching. Put the date in your diary. It promises to be a great day's chess.

It was the younger half of the club today (or at least the younger players plus the older ones who come each week). Welcome to Charlotte, Vivaan and Pranshi who all came along for the first time.

Thank you to James Bishop for teaching Pranshi and Charlotte (Charlotte had never played before) and to Ed and Jixuan who jointly won my Player of the Day trophy for their exhibition match and tutorial on the demonstration board. 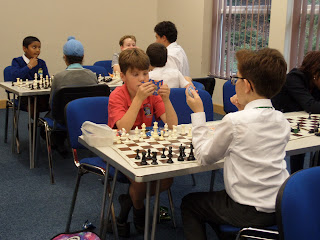 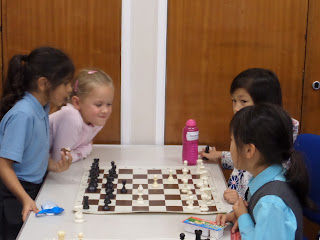 Pranshi and Charlotte - on their first visit - paired up with Khrisha to take on Jiyuan and Abigail. Nice to have so many younger girls along. 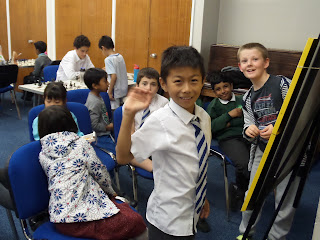 Jixuan and Ed playing an exhibition match on the demo board.

Good luck to all our players playing in the EJCA Grand Prix tournament in Chelmsford on 13th October (especially those entering their first tournament). Entry details at www.ejca.co.uk