On Sunday 11th September will be the first Brentwood Train and Play. This is an exciting new chess event I’m organising with IM Richard Pert and will combine coaching sessions aimed at players of different standards and rated match play against opponents of similar standard. There is a strong CJCC flavour to the day with fellow CJCC parent (and former Essex Champion) Russell White part of the coaching team. 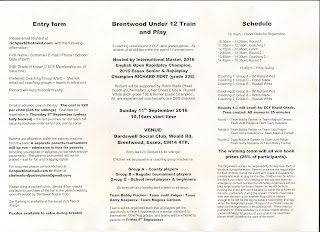 Richard and I have spent a fair amount of time deciding on the format and putting the day together and plan to run a series of these events in the future. The Essex Junior Chess Association are also planning a series of coaching events which I’m also involved with. Details of these will appear at www.ejca.co.uk

Also on the EJCA website is the entry from to the first of the Grand Prix tournaments to be held in on 8th October.

Next week (16th) CJCC will meet for mid-holiday chess and I’m running an invitational coaching morning on Saturday 20th.