The new chess season is well under way now. On Sunday I went with KEGS to Eton College to take part in a one-day tournament. KEGS entered two teams made up of 6 players each with the A team scoring 19.5/30 to finish in the top 10 and the B team exceeding grades and expectations with 15.5/30.

Finishing in the top half means KEGS B also qualify for the regional section of the National U19 School Championships. As most of the B team were from Year 7 and 8 this was a fine achievement and bodes well for the future. KEGS and their students are lucky to have a teacher in Tim Worrall willing to organise so much chess on behalf of the school. Next on the agenda is a weekend away at the junior 4NCL at the end of September.

CJCC player Ben Pickwick was playing in his first tournament for KEGS and scored a magnificent 5/5 for the B team. CJCC poster designer Elliot Cocks was part of KEGS A after flying back from representing England in the European Youth Championships in Romania the previous week.

Below is a photo of the event which took place in the palatial surroundings of the school hall. 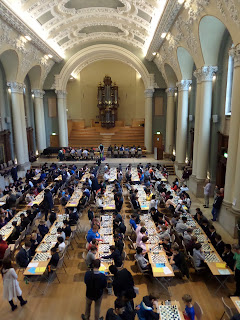 Tomorrow (19th) is the first day of the new season at CJCC then on Sunday 24th is the next Train and Play event at Moulsham School with guest coach Grandmaster Chris Ward. Details at www.britishchess.co.uk