On Saturday I was co-organising the Brentwood U12 Open. It was great to have 12 CJCC players there for what is a particularly nice event for those new to tournament chess.

Olga was CJCC's top scorer with 4.5/6 but a good effort all round. A special mention to Hugo for getting a prize for his work in the coaching room and Prasid for his prize as the tournament's youngest player (scoring 1.5/6). Hugo, Prasid, Pradyun, Anish and Cody were all in their first tournament and did themselves proud with their approach and results. 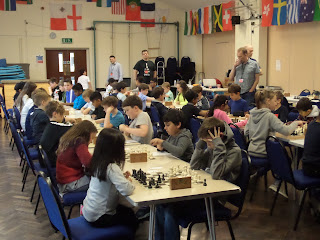 Fraser deep in concentration aganist Mae closest to the camera. CJCC players Bertie and Jake playing each other 3 boards along. 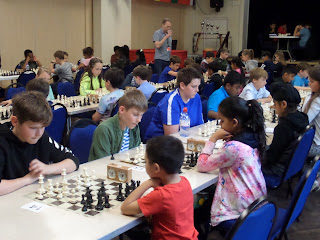 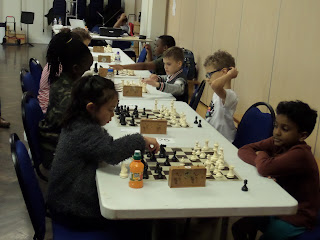 CJCC's Pradyun on the right against Lucy. Like many of the younger competitors it was their first tournament.

Sunday was the Essex Megafinal with 19 players from CJCC competing. They had won their places in the UK Chess Challenge tournament we held between Christmas and Easter.

12 players managed to score 3.5/6 or more to qualify for the South of England Gigafinal. Our best section was the U9s with Olga becoming Essex Suprema, Jixuan coming third and Lawrence and Adam also qualifying. All 19 CJCC players won at least one game which was great to see.