The British Chess Championships are currently underway in Hull. CJCC players Olga, Jake and Maheep played in the U11s. No prizes for them but some battling chess and no shortage of effort. They can be very proud of themselves.

Essex and CJCC success came in the U8s where former CJCC players Harry and Max finished 1st and 2nd. Harry and Max also scored well in the U9s with Harry leading until losing to Rohan in the last round.

It was nice to see so many juniors (including Rohan) from outside Essex who have been to British Chess events doing so well.

The very best of luck to the other Essex junior players in the different events this week. 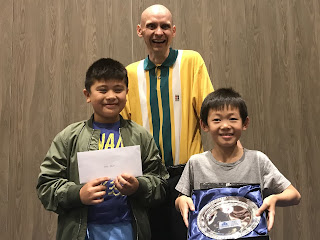 Double Essex success in the U8s with Harry (on the right) and Max pictured with me. Thanks to Harry's mum Aiqing for the photo.