Chess is an indoor game and rarely affected by the weather.

An unfortunately timed downpour yesterday however meant the boys who walked up as a group from KEGS (thank you Ben and Neil for leading them) turned up looking a little damp. They sportingly lined up for a photo while still dripping. 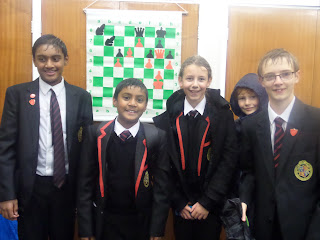 If the Player of the Week Trophy had been awarded for the neatest checkmate Joseph would have got it for his double rook mate against Luv.

But Adam won it for arriving well before everyone else and setting out the tables, chairs and chess sets. His early arrival also meant he could sit in the dry and watch the other players arrive in various states of dampness.