This is a suitable puzzle for Easter by Sam Loyd titled “Faith”. White to play and mate in three. I’ll put the solution at the bottom of the post. 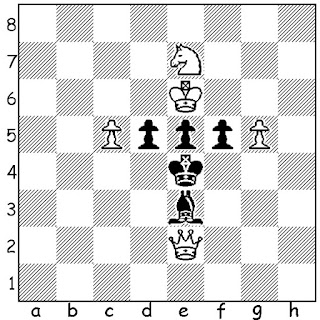 The club will be open over Spring Break for everyone who is about then revert to the older half on 12th April. They’ll be Easter treats for everyone and also certificates for all those who played 4 or more games in the UK Chess Challenge.


Moving forward the club will continue to alternate between the older and younger halves up to half-term week.


On Sunday 24nd April there is the latest EJCA chess tournament in . Entry forms are available via the club or at www.ejca.co.uk For anyone who will be playing their first tournament we’ll do some preparation down the club.


Congratulations to Olga who at 7 entered a mixed adult and junior tournament this weekend. She managed to correctly record her games (a requirement at these events but beyond some adult players) and score 2/5. This meant she outscored her dad who was playing in one of the higher sections. When we played over one of her wins she showed me her 4 step guide to the opening which we’ll share down the club.