Last weekend I was involved with two junior chess events. On Saturday I did some coaching with the Essex U11 and Essex U9 squads. It was great to see the enthusiasm of the players and see Olga, Vera, Tom, Jerry, Harry, Sebastian and there from our club. Most of these (and a few others from the club) will be playing for in the next couple of months.


Sunday I went with KEGS to a junior tournament in Bury St. Edmunds. Once again our club was well represented with 7 players. The U9s in particular did very well and special congratulations to Nina and Jerry for scoring 5/6 and splitting a £75 prize.


This Tuesday it was the turn of the younger players at the club. We also welcomed 6 new members – so hello to Thomas, , Lucy, Izzy, Henney and Alex. Josh took charge of the tournament after doing a bit of teaching on the demo board. helped our newest players with their chess and even found time to beat Nina in the tournament. Both boys as ever did a great job helping out – thank you!


Below are the latest tournament standings which were easier to put together with Josh’s careful recording than my hurried scrawl. Congratulations to Anika and Francesca who became the first players to complete their 7 matches. Anika did particularly well to score 14 points and won herself a furry chess mascot. 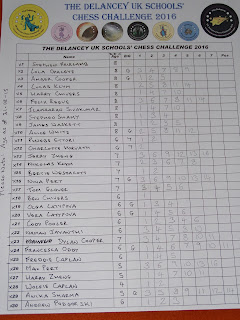 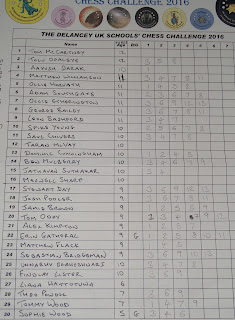 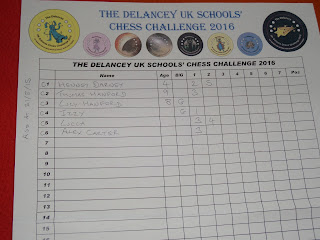