Ben Pickwick was our UK Chess Challenge Champion and he is pictured below with the trophy and chess book he won. Congratulations to Ben who will be taking part in the Essex Megafinal on May 14th. 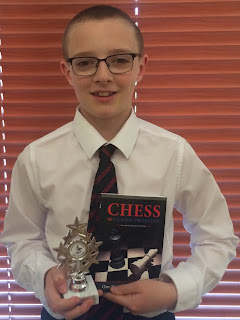 Congratulations also to Stewart, Josh, Jake and Ben Chang who have been selected to play for Essex U11s in the National Final next weekend. The coach leaves for at 6am so it promises to be a test of stamina as much as chess strength.

All 4 boys took part in the EJCA Grand Prix tournament in last weekend alongside quite a few other CJCC players. Stewart won his first EJCA trophy by finishing 3rd in the U11s (half a point ahead of Josh). Olga won the U9s with 6/6. Dinil won the trophy for Best Newcomer.

Olga and Dinil were part of the Essex U9 team that finished an excellent 5th in their National Final last month. Both of them managed to score 3/3 in their individual games.