Busy week at the club with 30+ players for the older half. I did snatch a few photos to balance the younger half collection from last week. Good job Scott and Russell were along to help.

Congratulations to Ed for being the first player to reach 11 points in the UK Chess Challenge and win a mascot. Also to Alice for being Player of the Week by doing what few players manage and beating Stewart.

This weekend Moulsham host a primary school competition. Many of the Moulsham and St. Anne's players from the club will be taking part so good luck to them. I'm really pleased 6 older CJCC players and former Moulsham Junior students will be returning to their old school to manage the 6 Moulsham teams taking part in the competition. 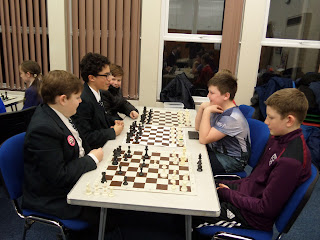 Ollie (left) returning to chess action ahead of his mangerial role playing Toby. Leon and Theo in the middle - who played their match with no rooks but 3 queens each - will also be managers. 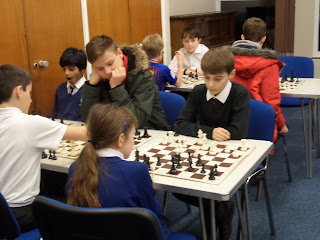 Alice W on her way to beating Stewart. Ewan sitting next to Alice would eventually beat Nikita Z in a close match. Anish (off camera) looks to have surprised Hriday. Felix, Jake and Nikita A behind. 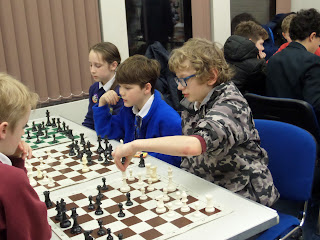 William playing Adam next to a thoughtful Cody and new member Alice S.