We are 3 weeks into the term and the UK Chess Challenge is currently led by James Naylor on 10 points (partly because he has played the most games!).

It was the (mostly!) older players today. Alongside the tournament we enjoyed a clever queen sacrifice checkmate played by Toby in the London Junior Chess Championships over Christmas. 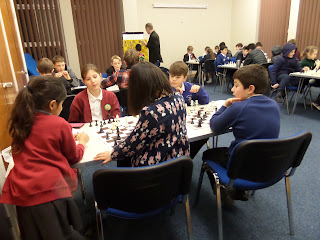 Khrisha, Cody and Hector are watching Millie's game with Jiyuan. 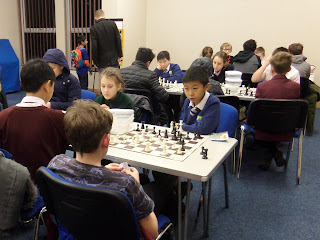 Jixuan is looking serious against tournament leader James. Evan and Anna would have an exciting draw next to them when they were left with just a king each.

Congratulations to our prize winners and competitors at the recent EJCA tournament in Southend. Rishi won the Best Newcomer trophy in the U9s. Olga (Year 5) and James Zarzecki (Year 7) both played excellently to win money in the U18 Minor.

The new chess grades are out today. Have a look if you dare!

Please get in touch if you have any questions about the club or junior chess in Essex.