It was great to see Wolfie (on his 8th birthday) after his chess break and to welcome Adi, Luv and Kush to the club for the first time.

We carried on with the UK Chess Challenge and the younger players all got a Chess Battle Manual and an invitation to take part in online chess as part of the Challenge.

Alice S kindly took the photos below. Alice is one of the Year 7 players always willing to help the younger ones which is a vital part of the club. Special thanks to James today for all his patient work with Pranshi and Alex. 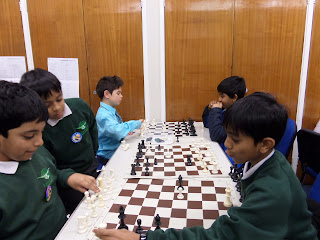 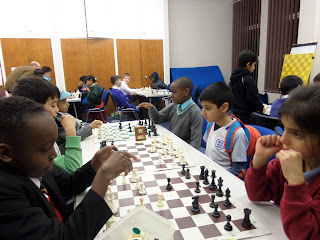 Josh playing Khrisha closest to the camera. Khrisha's brother Rishi next to her has his "Best Newcomer" trophy with him from his first ever tournament. 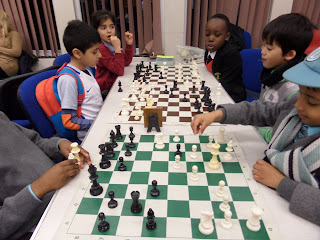 Adi (age 5) on the right nearest the camera about to move against fellow St. Cedds player Tokumbo. 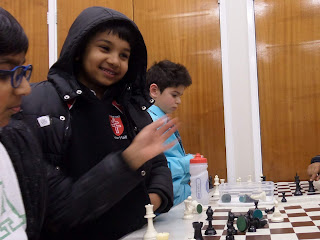 Solan is happy about something. The board looks like a battle zone. No wonder the pieces get mixed up! 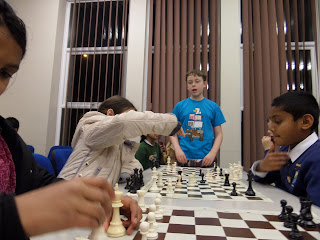 Olga about to move against Dinil. James is standing who did a marvellous job helping Pranshi and Alex play their game today.

Good luck to all our players taking part in the Essex qualifier for the National Primary Schools Chess Championship on Saturday at Moulsham School. It will be a busy weekend with the Essex Junior Chess Association coaching day on the Sunday (also at Moulsham).

Moulsham Junior School have 6 teams taking part who will all be managed by old pupils who are current or former CJCC players. Mildmay's team is also managed by an older CJCC player. Passing on your experience like this is an important part of our club ethos.