This week (21st January) was the turn of the younger players. We had a busy week at the club with over 30 players including Mason and Owen along for the first time.

Shaasvath was our Player of the Week for winning his first ever game at the club after stalemating Janet (4 queens were too many!) and losing in 4 moves to Louis. On the giant board we looked at the Louis Mate and the Hugo Mate (Hugo won in 2 moves at school).

Special thanks to Elizabeth for her patience in helping Hannah and Kamilla play a whole game. Well done to Rhys as well for managing a full game on his own against Owen.

Luoke (Year 3) has moved into the overall lead among the younger players with 3 wins and 2 draws from his 5 games. Sebastian and Shrishti are close behind. John remains the overall leader (one point ahead of Luoke). Sid and Maya are among those who started with 2 wins this week.

In between shuffling the players and patching up Arjun (chess finger wound) I took the photos below. 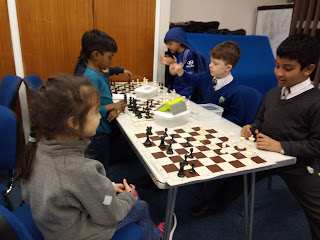 Samira and Joshua had a long game. Sid, Ben and Rishi are also in the picture. 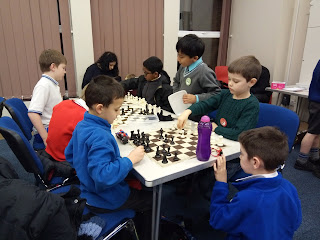 Robert is playing Owen closest to the camera. 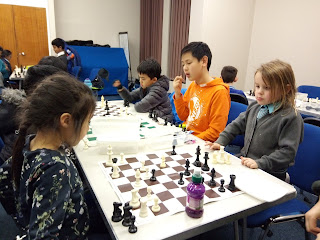 Kamilla and Hannah had a game that lasted all afternoon (helped by Elizabeth). 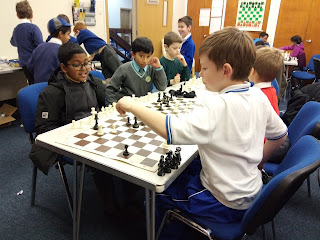 Lawrence about to move against tournament leader John (watched by Ethan).