Today was the final Essex Junior Chess Association tournament of the season. It was great to see so many players from there and I managed to round most of them up for a photo before battle commenced. 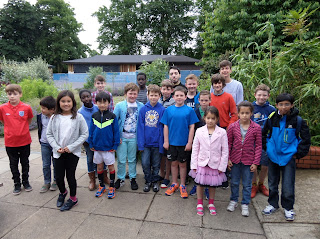 Nina (third from the left and bolting for freedom) and Harry (who was hiding) both won two trophies – one for scoring 5/6 in the U9s to finish joint second and one for coming 2nd and 3rd respectively in the overall U9 Grand Prix – to be CJCC’s most successful players of the day. Congratulations to all our players who took part and among those from CJCC Sebastian and Josh also won a trophy.