Essex U11s had a great tournament on Saturday - finishing 3rd and qualifying for the National Finals. The whole team performed at a consistently high level with CJCC's players (Jake, Olga, Ben, Toby and Felix) scoring 12 points out of a possible 15. Amazingly the top 5 boards for Essex are young enough to play again in the team next year.

It was much tougher for the U9's the previous week but Olga, Maheep, Jixuan and Lawrence can be proud to have represented Essex. Maheep top scored for CJCC with 1.5/3.

Next weekend Alice Smerdon will make her debut for the Essex girls team alongside Olga and Annie so the best of luck to the three of them. Alice warmed up for the occasion by beating Scott in his simultaneous challenge in a game lasting over an hour.

We have a new leader in our tournament so congratulations to Adam. His win over Maheep took him to 19 points. Two weeks to go. 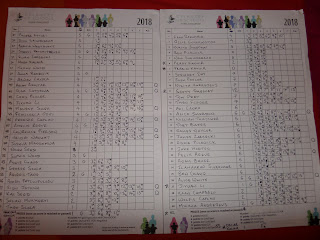